What made her different from other Sprinters

At the age of four, she had double pneumonia with scarlet fever, a deadly combination which left her paralyzed with polio. She had little recovery from Paralysis but she had lost her leg and foot strength. She had to wear a brace and doctor said she would never be able to put her foot on the ground. But she wore the brace till eight years of age. 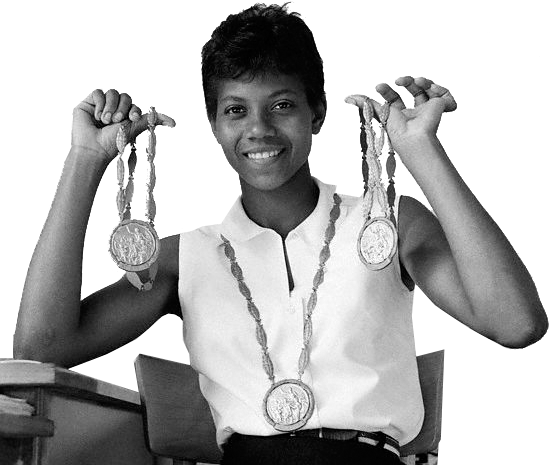 Her mother encouraged her; she told Wilma that with God-given ability, persistence, and faith she could do anything she wanted. Wilma said, “I want to be the fastest woman on the race track on this earth.”

Step towards her success

At the age of nine, against the advice of the doctors, she removed the brace and took the first step in her career by going against the doctor’s saying that she never would run. At the age of thirteen, she entered her first race and come way, way last. And then she entered her second, and third and fourth and come way, way last until a day comes when she comes in first.

At the age of fifteen, she went to Tennessee State University where she met a coach by the name of Ed Temple. She told him, “I want to be the fastest woman on the track on this earth.” Temple said, “With your spirit, nobody can stop you and besides, I will help you.”

The day come when she was at the Olympics and at the Olympics she matched with the best of the best. Wilma was matched against the woman named Jutta Heine who had never been beaten by anyone. The first event was the 100-meter race. Wilma beat Jutta Heine and won her first gold medal. The second event was the 200-meter race and Wilma beat Jutta second time and won her second gold medal. The third event was the 400-meter relay and she was racing against Jutta one more time. In the relay, the fastest person always runs the lap and they both anchored their teams. The first three people ran and changed the baton easily. When it came to Wilma’s turn, she dropped the baton. Wilma saw Jutta shoot up at the other end; she picked the baton, ran like a machine, beat Jutta a third time and won her third gold medal. It became history: That paralytic woman became the fastest women on this earth at the 1960 Olympics.

At the 1960 summer Olympics in Rome, Rudolph became the first American woman to win 3 gold medals in the track. Rudolph has given a stand-out performance in the history of the Olympic competition. The French called her “La Gazelle” She became an instant celebrity in Europe and America. She got an official invitation to the White House by the President himself John F. Kennedy(1917-1963) and awards and television appearances and many more.

Here is the very inspiring story to me. Wilma was having that burning desire to become the fastest woman on the earth and with an amazing willpower, she achieved her goals.
But here learning is the success is not easy, you have to go through lots of obstacles and never lose hopes and let you down under any circumstances.

This inspiration to achieve something should be there in our life so that we can achieve anything at any circumstances.You all can use this inspiration in your life. Kindly share your experience in the comments below.

Is Mediocrity Considered One Of The Failure?