Home Health OTC Drugs and Their Side Effects
Facebook
Twitter
Google+
Pinterest
WhatsApp
Linkedin
ReddIt
Email
Tumblr
Telegram
Have you ever taken medication without doctors permission?? (I know your answer here ‘Obviously Yes’)or Have you ever bought drugs without the prescription??(I know your answer here too ‘Yes’)
But many of us don’t know how these OTC drugs can be harmful too.

“Over The Counter” (OTC) drugs are the drug you can get without prescription at chemist or drugstore. Basically, OTC drugs are safe to use and which are intended to treat short-term illnesses. The reason people prefer OTC drugs are- easy to understand it’s mode of action, readily available at groceries or pharmacies, less expensive than going to the doctor and paying his checkup fees plus less costly than prescribed medication. That’s all to the good if OTC drugs are used correctly for a particular condition and in proper dosage and for no longer than the recommended time. Over the counter(OTC) drugs are most often used to treat ailments like heartburn, headaches and other pains, fever, cold and cough. As per FDA (Food Drug Administration) till date, there are more than 300,000 Over-The-Counter drugs on the market. This number will continue to grow if more prescription drug moves to OTC lists.

In some cases, even if OTC are taken correctly, there can be some problems because patients with the certain health condition are needed to be aware of it’s side effects, drug-drug reactions, drug-food reactions. For example, people with heart disease or hypertension people are warned not to take aspirin without doctor’s permission.

A study of 500 people carried at Northwestern University in Chicago by Dr, Micheal Wolf and published in 2012  for “Risk of unintentional overdose with the non-prescription acetaminophen products” which revealed OTC medication containing acetaminophen could lead to acute liver failure.  The potential for side effects and adverse events due to unintentional misuse of these OTC products is substantial, particularly among heavy users of acetaminophen and those with limited literacy.

If  you or anyone you know have taken OTC with incorrect dosage or unintentional overdose, here are the symptoms which need immediate attention

Drowsiness
Nausea
Vomiting
Rapid heartbeat
Blurred vision
Redness
Itching
Any kind of sudden change in your body after taking medications, you should see your doctor and find out manifestations of your symptoms. 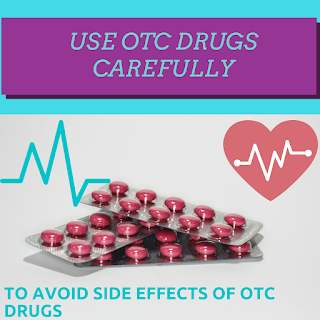 How OTC drugs are harmful

It’s hard to say. As far as form and dosage of OTC are unknown it’s difficult to say harmfulness of OTC drug. It’s not easy to determine the fatal dose of Over-the-counter drugs, I will explain you with an example of Acetaminophen. Acetaminophen is an active ingredient in Tylenol, Panadol, Percocet and many others. Acetaminophen in general term is also called as Paracetamol(generic name). Acetaminophen work is to reduce fever and give relief from pain (pain of mild to moderate scale). Studies of humans have reported ‘liver failure’ as a side effect of Acetaminophen when it exceeds the optimal dose(dose of a drug that will produce desired effects). Drug acceptance rate varies widely on factors including the condition of the liver, ingested drug dose, whether the pill is taken in conjunction with alcohol, etc. Acetaminophen has narrow safety margin as compared to other Over-the-counter drugs. Doctors have reported liver failure if consumed Acetaminophen 2.5 grams in a day. Approved dose limit is 1.5 grams or less.
Another of these OTC’s is Dramamine, the popular name brand for motion sickness pill. If abused, Dramamine side effects may include hallucinations, restlessness, blurred vision, dizziness, and rapid heartbeat. Side effects other than those listed here may also occur.

Diet pills sold over the counter carry their own risks when abused; the negative side effects often include heart palpitations. In some cases, individuals become addicted to OTC diet pills within weeks of the first dose.

Other OTC medications of cough suppressant and cold medicines containing dextromethorphan(DXM) can be safe and effective when taken as recommended, but they can also be abused and can lead to serious adverse health consequences. Some of it’s side effects include double or blurred vision, impaired physical coordination, rapid heartbeat, drowsiness, numbness, and disorientation. Similarly, cold medicines containing active ingredients like Pseudoephedrine which is a stimulant. Abuse of this medication can cause you hallucinations and intense ‘body high’.

Older adults often use many medications at the same time, including prescriptions and OTC medicines. Their body process medicines differently than younger adults. There might be chances of adverse reaction between drugs or between drug and food.

Duplication of drugs leads to overdose

Many patients get catch hold of the drug overdose, sometimes they don’t realize how much of drug they are taking. For an example, if you take OTC medication Ibuprofen (Brand names- Advil, Motrin) along with the prescribed anti-inflammatory drug Aspirin( Brand name- Ecosprin) by your doctor, then this will cause damage to your kidney.

Food may alter how your body processes medications. Medicines taken by orally must be absorbed through the lining of the stomach or small intestine. But at the same time nutrients from food, you eat also needs to be absorbed through the lining of the stomach. If you take medicine with the food when it’s not recommended, a possible interaction is that your body might not be able to absorb the medicine as it should.
Similarly, abusers of OTC medications, who mix alcohol with it, can put users at risk for internal bleedings, heart problems, and difficulties in breathing.

People have committed suicide by overdosing on certain OTC drugs. People who rely on OTC medications often fail to read instructions and warnings on the labels and cartons.

It is important to take medicine correctly and be careful when giving them to children. Especially parents with teenagers should be aware of the potential for abuse of these medications and side effects of these OTC’s when taken in large quantities, which should signal concerns and the possible need for intervention and treatments. When you start a new medication either it may be prescription or OTC, make sure you understand how to take it correctly. Every allopathic drug has it’s pros and cons after it exceeds optimal dose. If any confusion arises please ask your primary care or pharmacies regarding usage of medication correctly.