Home Health Eating Too Much Salt Side Effects
Facebook
Twitter
Google+
Pinterest
WhatsApp
Linkedin
ReddIt
Email
Tumblr
Telegram
Salt does more than just making food tastier — if you agree with the fact then only go ahead with the article. Too much salt in the diet causes the body to deteriorate faster than a normal diet. So how much salt intake is too much for a healthy human, the answer is definitely not more than 6g of salt or 2300mg of Sodium.

Salt is a crystalline substance. Salt is the mixture of Sodium and Chloride in the ratio of 4:6 which is the most common source our body receives Sodium. A very important thing I wanted to bring it to your notice is our body cannot manufacture by own either of it. So it has to be sourced from outside the body. 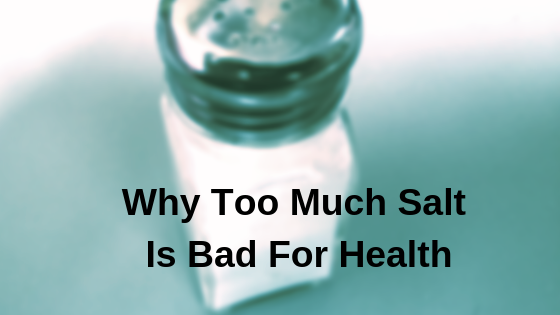 Do you know why Gandhi led a civil disobedience campaign of salt? One reason is protesting against British policy of Salt taxation and another reason that salt is one of the few useful and abundant mineral on earth which is the scientific backbone of a human body. Without salt, you can imagine how tasteless and brutal life would be.

A number of body functions where salt contributes an important role like:


For our body salt(i.e. Sodium) is very necessary to contract muscles and functions properly for body movements.

American College of Cardiology conducted a study and revealed excess dietary sodium may not only affect blood pressure but can adversely affect and target different organs, including blood vessels, heart, kidney, and brain.

Diet-conscious already in the battle cry for ‘everything in moderation’ but when it comes to salt which gives the basic taste of food, they just can’t help themselves.

As per dietary guidelines, people aged between 14 and 50 shouldn’t limit their sodium intake less than 2300mg. Excessive consumption of salt is not good for overall health and also the body starts to retain the maximum amount of water.

All the below conditions start approaching when consumption of salt is more than is good for us.
Salt is the major contributing factor to most disastrous disease like heart attack and stroke.


Some serious symptoms of consuming salt too much

World Health Organisation(WHO) recommends total 5g salts per day for the adults to maintain good body balance.
I have brought you this article to share consuming too much salt could be harmful to overall health. Eating too much salt side effects let’s see below.

Salt in the body utilized to performs numerous body function and one of them it is pumping of blood in the heart.
The American Heart Association(AHA) explains too much salt increases pressure in the blood vessels by retaining more water in it. Thereby high blood pressure buildup plaque formation around the arteries may lead to a greater risk of developing stroke and heart diseases.
Endothelium lines almost all blood vessels and endothelium has single layer cell outering as it helps in exchange of nutrients between the bloodstream and surrounding tissues.

Bone is the storage of calcium. Whereas Sodium increases calcium excretion and decreases the bone density. Less dense bone is a sign of weak bone and later it turns to osteoporosis as age increases.

Most Popular: Loose weight in 1 month with herbal drinks

6. Impairs the functioning of blood vessels

Eating too much salt may cause your body to retain more fluid and leading to bloating. Bloating is sometimes accompanied by burping, flatulence, and a feeling of fullness. Reduce salt intake in order to treat bloating.

Did you know that 80 percent of salt is hidden in processed and packed foods? Due to water retention property too much salt in the diet unwelcome extremity swellings. For the Asthma patient, salt could have life-threatening effect in children and adults, reported the researchers.

Too much salt can have a serious long-term cognitive effect. A study from 2010 revealed more consumption of salt negatively impacts your cognitive functions. Unfortunately, the study was observational, so researchers did not find why that happening.

When too much salt ingested it may damage arteries which reach the brain. However, lowering blood pressure may help to alleviate the risk of greater damage to the brain.

Some more facts About Salt