Is Mustard Oil Good For Your Diet?

In India, mustard oil is traditionally preferred oil for cooking in states like Bengal, Odisha, Assam, Meghalaya, and Manipur. Mustard oil has preached enough by our granny and health experts, and today we came to the place where mustard oil familiar to everyone.
According to research, it had been proven mustard oil has the perfect proportion of fatty acids including omega-3 and omega-6 fatty acids and this makes a perfect edible oil for a healthy heart. This was one study. 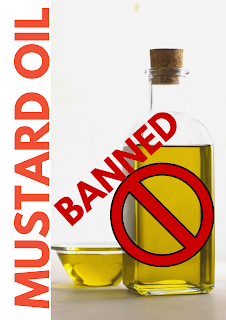 On the other hand, relevant studies in the early 1970s were done on animal for mustard oil, which also contains a high level of erucic acid. Erucic acid proved to be toxic on the heart of animals. Likewise, Studies for human haven’t been performed yet. Still, researchers believe it’s not healthy for the human heart when exposure to erucic acid is high. This is the reason why mustard oil was banned in the U.S for cooking purposes.
Erucic acid causes a few of the health hazards like an accumulation of triglycerides in heart muscles, causing fibrotic lesions of the heart, increasing risk of lung cancer and anaemia. Erucic acid found to be toxic due to these consequences of it.
After publishing this news in the U.S, other governments of different countries declared to be banned for better human heart health. Governments of the EU and Canada banned mustard oil usage for edible purposes.
Buy my favourite detoxifying liquid- Detoxifying juice for beauty skin
Thereby, USFDA requires mustard oil to be labelled as “FOR EXTERNAL USE ONLY”.
Major cases of dropsy seen in Delhi region due to which government decided to ban for cooking in Delhi in 1998.
Due to the undeniable fact of erucic acid content in mustard oil is 47% which is pretty enough for deterioration of health. But it also not wrong that mustard oil has a beneficial fat proportion and especially to protect heart when consumed in adequate quantity.